i'm to stupid i cant start it.

Got it, but blender doesn't find it

Blender is (from history point of view) ofcourse a TV renderer.
With superiour field settings (far better then say Maya) and 50 fields per second, Mblur is not very interesting. No video material will show mblur.
Ofcourse some people want the movies look, now thats only 24 frames and a good mblur is needed to secure smooth motion.
Playing animations on computers have (alas) no fields on 50 fips footage, turning them to 25 frps, so mblur is pretty much needed there as well.
But,... when rendering for video, forget mblur, and render fields!
(all the fps talk is in PAL. for NTSC it's slightly better with 60/30).
by bertram 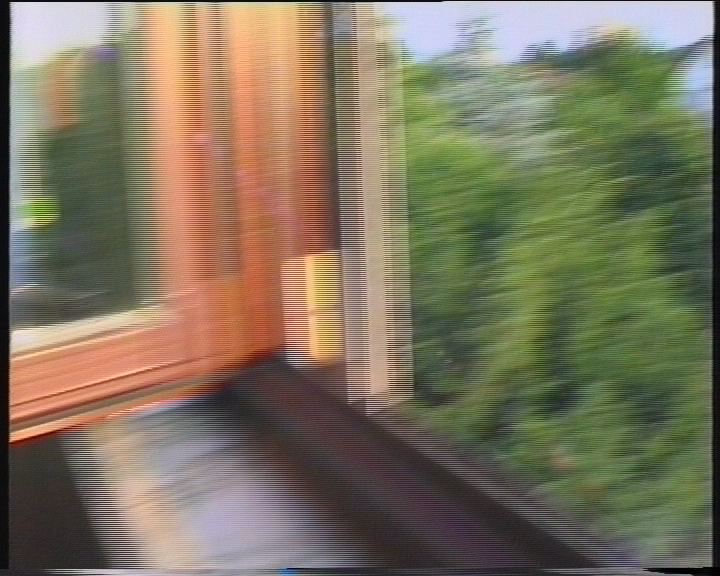 But you're right. Modern digital camera's have the option for slow iris shuts.

My point was (what I was trying to say anyway) that on video productions good fluid motion can be made with using fields.
( converting fields to frames is even a poor mans mblur, a Mblur:2 )
by IanCalvert
Doesnt look blurred to me, just looks like the two frames have been blended. This is not really blurred, but just done to smooth it.
Thats why every other line is of the next frame.


Ian
by joeri
There is some blur going on, here's one field:

I'm not sure this is all motion blur or just out of focus. Hard to tell. But looks like it.

On film a motion camera would look like this (notice: no DOF):
By Night (notice the dubble wheel caps):

On a real 'motion blur' something completely different happens:

Can you tell wich way the car is going? Strangely towards us. Dark objects seem to 'stick' ones if the backdrop stays dark, but light objects 'burn' into the celluloid. And where is the right front wheel?
I don't think a curved blend is going to make an image like this

alright then, how does renderman do it?:

Seems like a curved blend... The backdrop has depth of field.
by Dani
haha! every device that captures light (from the eye to the most modern camera) creates motion blur, and erm camera blur is no different from motion blur, only it's that the camera is in motion...
It's all about the time that a light source (think of it as reflective stuff too, not only lamps but all the rest) get's to print it's image on a sensor while in movement... the faster the shutter speed, the less motion blur (that's why spielberg's explosions in Private Ryan, or in Bands of brothers look so crisp: the shutter speed is high: the eye can identify eye particle easily, they aren't smudged)

Now... Blender's Motion Blur can be improved... surely... I mean, for example: motion blur in blender doesn't seem to take into account the additive property of light... check debevec's site...
precisely here: on the top:
http://www.debevec.org/Research/HDR/

And the DoF blur has nothing at all to do with motion blur, they're two different things. DoF is due to the focus point (and aperture settings) of the lens, while motion blur is not affected by the lens at all, but by the image being received by the film/CCD changing during the time that the shutter is open.

As for how to do it 'properly', well the simplest* way to improve blender's motion blur is to do the blurring on a higher dynamic range image, such as the floating point data that blender's renderer uses internally. Blurring multiple 24 bit images doesn't contain the information needed to allow for the extra 'power' of strong lights and their influence on the final image.

*Well, it seems simple to me, but I really don't have a clue

by IanCalvert
Joeri, I agree, it is blurred. However there is still some ghosting on the window frame, so I dont know whats happened there.


Would love to see blur using HDRI instead of LDR.

Dani wrote:motion blur in blender doesn't seem to take into account the additive property of light

Interesting!
It should be an minor task to change the way the mblur samples are blended since the functions for this should already be implemented with the recently added new texture blending modes, don't they?

Oh, is blender's rendering engine ready for 16bpc-output? I've been crying for this so long...

by joeri
DoF has something todo with motion blur.

A reallife camera makes a correct brightness by having a balance inbetween light, aperture (diafragma, size of hole where lights comes truw in the lens) and shutter speed (exposure time).

Although in movie's the exposure time can never exceed the 1/24 p/s. It can be set to as fast as 1/8000 per second.
The less light you have the bigger the diafragma you'll need, the more DoF. Or,... the less DoF you want the more light on the set you'll need.
Or if you want more motion blur, dim the lights, crank up the exposure time (in CG even fake expore times beyond 1/24 p/s)
Since the Mblur is related to the shutter speed (exposure time): the DoF is related to the Mblur.

For a correct implementation of Mblur and DoF blender will need to introduce:
Camera Aperture (diafragma)
Shutter speed (exposure time)
Fstop (for exposure times beyond 1/24 p/s)
Camera focalpoint (center of interest related to zoomlens)
And maybe even Shutter Angle (the camera shutter is not top/down, it's a wheel with blades and the blades rotate infront of the lens)

Seriously
of course, exposure time is linked to aperture size which is liked to DOF, but having or not focus blur and motion blur on a same picture is more related to the dynamism of the scene than to technical considerations... you can have an infinite DOF (no focus blur) and a lot of Mblur, or the opposite.... and consider that to compensate a small aperture size, you can improve the light setup