I am new to both Blender and Python but it shows great potential to become my new favourite mesh scripting tool after having tried MATLAB and c++.

I have created a mesh like described here:
http://wiki.blender.org/index.php/Doc:2 ... n/Geometry

Except my mesh is created algorithmically by nested for loops. Because I am too lazy to wrack my brain over shared vertices, I create 3 vertices per triangle and afterwards I want to let Blender do the work.

I have found different solutions on the internet using remove_doubles(threshold), but they didn't work for me so far. Mainly because of my noobness in Python I assume. I am using blender 2.66a. It would be great if someone could provide an example on how to integrate such thing into the pyramid example from the link above, although it wouldn't have any effect there.

Also, it would be great if not all doubles were removed but only those that are not part of an edge with an edge angle below a limit that I can specify. That way, I can prevent sharp edges (that should remain sharp) from being smoothened by goraud shading.

Kind regards,
Mirko
by CoDEmanX
add this to the bottom of the script:

you can use the use_unselected option if you want. And keep in mind that remove doubles is a mesh operator, it works with the active mesh in editmode. It takes selection into account!

If you don't want a smooth shading, add this to the bottom of the script:

Thanks for your answer, I will try that when I am at home.

In general I want smooth shading, exept at sharp edges. Imagine a cylinder. It should look like the left one in this image: 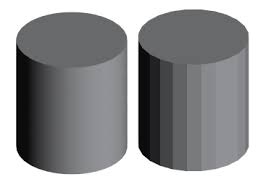 The curved part looks smooth but the edges around the caps are smooth. If I remove all doubles and apply gouraud shading, the sharp edges will look like the ones in this image:

which is not what I want.

So, depending on the edge angle I either want to keep double vertices (for edges) or I want to join them (for smooth parts). It would be cool if this can be done by blender, otherwise I will do it manually.
by Mirkosahedron
Sorry!

Here the link to the first image:

And of course I wanted to say
The curved part looks smooth but the edges around the caps are sharp.
by Mirkosahedron
Hi!

So it worked in the pyramid case. But with a more complicated model, blender just crashed.

Everything works as expected if I comment the last line. Before, it also worked with N_INNER and N_OUTER being set to 6. Now it always crashes although I didn't change a thing.
by CoDEmanX
above me.update(...), add

that should help...
by Mirkosahedron
Thanks! Now it does no longer crash.
Also, the redundant vertices are merged (because all adjacent edges move when I move a vertex).
However, the faces are gone and an empty skeleton remains...
by CoDEmanX
validate() probably removes verts in identical locations... that is a problem.

you should try the bmesh module to create the geometry, it seems to handle this nicer.