after i talked with other cg artists about blender (i use Blender, they use 3dsMax) i started creating a feature proposal:
http://www.neeneenee.de/blender/features/

It is just a beginning, just a proposal not a law.
hope this is inspiring.

Sorry for my bad english.

when you constrain movement to an axis in grab mode [or scale mode and stuff] with either the middle mouse button or the x,y,z keys the axis does show up [it has for a couple releases]

as for the viewport thing you mention, I think it would end up with a "camera" like command to rotate the view, I would find it annoying, I don't usually need to constrain rotation of the camera to one axis [and if I do I would usually be okay simply using front/side/back/top/right/bottom views]

though, I think there should be a view rotation mode which doesn't allow the camera to be flipped over [like the blender camera controls in wings3d]. People think turntable should work this way [iirc it never has]

[oh, and you can do what you describe with: shift+d [enter, without moving anything], alt+s and a negative value, then [optionally] flip normals]
Top

Thanx for your comments.

With rotating the perspective view around an axis i do not mean camera view.

Solidify is more as you discribed with
[oh, and you can do what you describe with: shift+d [enter, without moving anything], alt+s and a negative value, then [optionally] flip normals]#
If there where holes in the object or it is a tube or a half sphere it generates the side faces too.

I updated the solidify section with a example picture and links to solidify plugins from other software (bottom).

As far as the solify goes, I would suggest modifying the technique above to use "E" instead of "SHIFT+D":

The extrude above will generate all required faces.

Here is an image that I just created using this method. The starting object was a half UV Sphere with a hole cut into it. 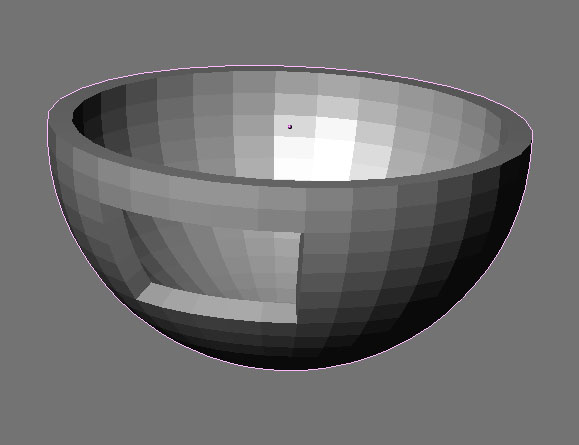 ok,
but think about speed (one step instead of some steps and the problem that you must think about how to do it without solidify) and think on complex objects
So i think a solidify function would be usefull.
As you can see at the bottom of the chapter other 3d software has these functions too.
Top

Yes, I agree that it would be a nice to be able to cut out the extra step. I just wanted to point out a way it can be done at this moment (in case you needed to do it and we're not sure how).
Top

Thanx for your comments, it was interesting to see how it is possible now. But as you wrote you need some steps more for solidify and you can do this just outside or inside but not from center.
Top

I updated the feature proposal again:

...and another update of my proposal, this time about the knife tool:
http://www.neeneenee.de/blender/features/#10
Top

Say Im making a building and the walls need to be 90 cm Thick.

Im working on an inset/outset function in python- Its not as hard as I expected-
The resulting mesh well have a uniform thickness.

...and again a update of my proposal. I thought about the boolean function:

The workflow you suggest for booleans doesn't fit at all in the UI. It's quite standard to have two (or more) object selected and have the Active object work on the Selected object(s).

Martin
Life is what happens to you when you're busy making other plans.
- John Lennon
Top

@theeth
I know that and any time i use boolean (that is not often because the bad results) i do not know which object i must select first and which i must select last.
That's why i suggested this workflow because so you can abort without modifing the mesh if you have selected the wrong object first.
Top
Post Reply
67 posts